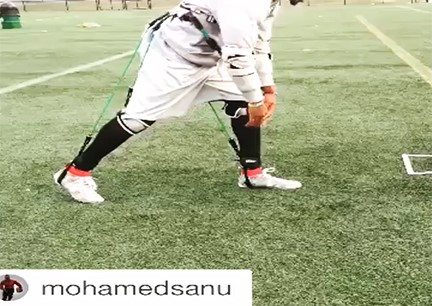 “There are tons of drills that help improve agility, quickness, and evasiveness, but smart coaches and players create position-specific drills by using both close and open drills in a random order. This resembles the more realistic (and chaotic) environment on the field come game time.”

Football players at all levels rely on superior agility and quickness in order to have an edge on the field.

And for good reason: those skills improve performance, decrease risk of injury, and help players become evasive with fakes and the ability to neutralize an opponent.

It’s not rocket science, though science and innovation is involved in developing the ultimate athlete.

Check out how these NFL pros use the Juke Performance MASS Suit for an on-the-field edge.

There are tons of drills that help improve agility, quickness, and evasiveness, but smart coaches and players create position-specific drills by using both close and open drills in a random order. This resembles the more realistic (and chaotic) environment on the field come game time.

Watching football is one thing, but playing it is when one begins to appreciate the need for mobility — unique to different positions.

These positions can be broken down into three categories.

Let’s take a closer look at each one of them:

Inside Lines (Offense and Defense)

When it comes to the interior line positions, we’re talking about:

Super explosion, acceleration and balance are key areas of development for these positions.

Athletes like these also need to have the skills to drop the hips within the base immediately and stay on their feet without getting knocked off course. Balance, center of gravity, and leverage are a huge role with interior lineman. As always, having a support base and quick feet, along with strength and power are a must-have.

If you’re a linebacker, tight end, fullback, or safety, consider yourself a combination athlete. You need to have the size and power to handle the bigger interior linemen. Not only that, but your movement skills have to be up to par if you’re going to keep up with the skill and speed players. (We’ll talk about them soon.)

Really, combination athletes have the most diverse set of requirements.

Movement training needs to be integrated throughout programs. And while players who fill these positions should focus on strength and hypertrophy, these skills shouldn’t come at the expense of speed, agility, and quickness.

Think about it for a moment …

Linebackers and safeties need that first-step quickness, explosive power, and the ability to run forward, backward, and side-to-side. Drop stepping to open the hips so that can fall back into coverage using crossover and backpedal steps is also a requirement.

Wide receivers must be able to cut at full speed in every direction. They typically have the ability to master pre-programmed (closed) routes and vary them based on their opponent’s defense and options within a play.

It’s typical for them to rely on cutting on the inside leg at angles less than 90 degrees. And they should be proficient in power cuts, which use the outside foot to redirect at an angle greater than 90 degrees.

Cornerbacks function in an open-skill environment and need to react very quickly to the wide receiver’s route and to the ball coming at them. They also need to be able to react to a fast-cutting wideout and a ball flying at them. Needless to say, coordination is king for the cornerback.

Quarterbacks certainly need a strong arm, but foot speed, base of support, and leg and core strength also play a key role in the player’s physical ability to compete.

A drop back is a closed-skill drill and can quickly become an open-skill drill when going up against an oncoming defensive lineman or linebacker. Crossover ability, backpedaling, acceleration, deceleration, and setting up quickly in the pocket should be the player’s focus during training.

Every skill player uses key movements, such as acceleration, deceleration, backpedaling, drops, and crossover turns. These positions require mastery of both general and special skill as well as closed-skill and open-skill movements.

Adrian Peterson using the MASS Suit to mix his training up.

By integrating different agility and quickness drills into the overall program, athletes will develop the evasiveness, quickness, and ability to improve overall prowess on the field (where it counts).

5 Drills to Ramp Up Your Speed and Explosiveness

Football coaches and athletes can customize the recommended drills below for every player on the field. The degree of specificity for each position is determined by how the drills are set up (distance travelled, duration, and so on):

6 Tips When Training Agility and Quickness for Football

Tip #1: It might seem counter intuitive, but in order to be quicker, learning how to stop is of paramount importance. Think about it: the sooner a player can stop, the sooner he can start again.

Another major factor for improving overall agility and quickness is deceleration. This also helps prevent injuries, like hamstring strains.

Tip #2: Football players need to produce a required force in the shortest amount of time. Agility training that focuses on reducing or minimizing the time between eccentric and concentric action of a movement helps get the job done.

Tip #3: There isn’t much football players can do to become as quick as they possibly can without an overall strength and conditioning approach.

Efficiency of movement (coordination, dynamic balance, proprioception — how the body and its individual parts respond to the environment — and flexibility, in addition to overall body strength and power) will help maximize results.

Tip #4: Muscle imbalance can lead to injury. Imbalances in strength or flexibility can impede agility, quickness, and overall performance.

Tip #5: The best time to perform agility and quickness drills is early on in the routine when the nervous system is still fresh.

Incorporating the movement portion of the program into the warm-up can be done immediately after a 10 to 15 minute routine that includes a dynamic warm-up and joint-integrity drills.

Tip #6: When it comes to agility and quickness, athletes should prioritize quality first, volume second.

Football athletes who can execute these drills successfully off the field will be able to do it seamlessly during a game. They’ll be quicker, more agile, and increasingly evasive, no matter what position they’re playing.