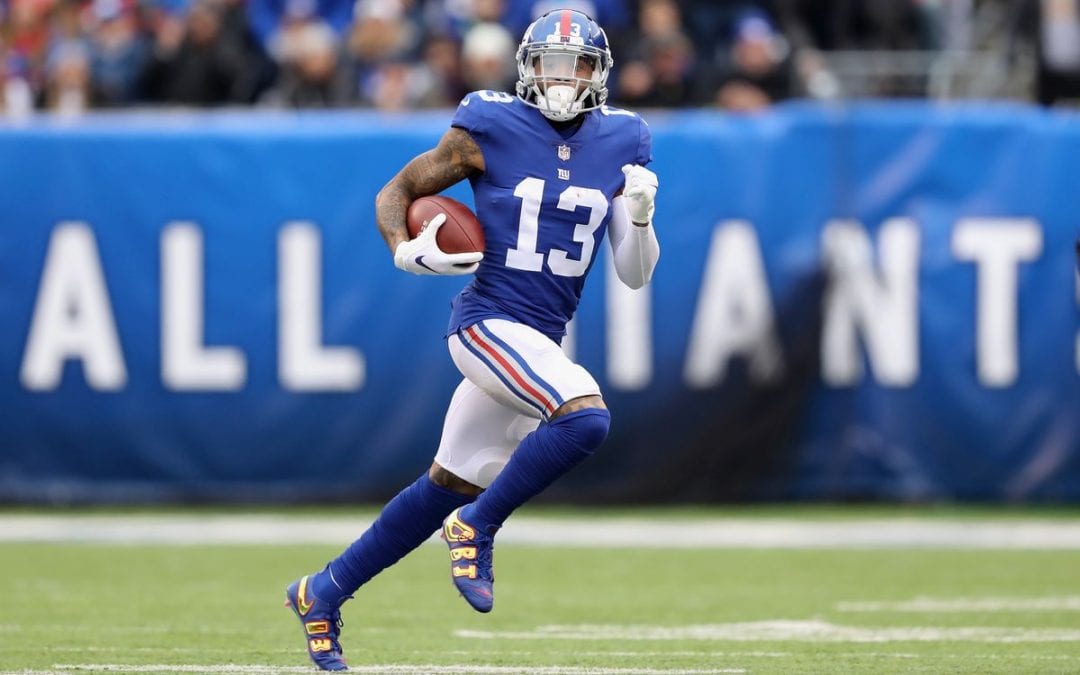 Odell Beckham Jr. is one of the best wide receivers in NFL right now. He achieved his level of success thanks to a healthy diet and a rigorous training routine. That being said, which exercises exactly have put him on the top of the game and what foods is he eating?

Odell Beckham Jr was known for eating like a child. He did not drink a lot of water, avoided fish full of nutrients and usually skipped the vegetables which were served with his meal. Fortunately, he understood the necessity of a nutritious and well-rounded diet to have a successful career. Now his chef Renee Blackman is preparing his food, which usually involves fish, pasta, chicken, beef and a plethora of vegetables. In brief, Odell Beckham Jr is eating a diet filled with proteins, carbohydrates, and micronutrients, while avoiding fat.

Now, let’s get into his most favorite exercises and drills which help him to be at the peak of his athletic performance.

This type of exercise helps players to become more explosive, and receivers especially have to work on their first few steps, because most of their game depends on exactly that. Odell Beckham Jr. is not an exception, and he is performing this type of exercise regularly. To perform reverse lunge split-jumps, put one of your legs behind you until it is almost touching the ground. Then, you have to bend your other leg until it reaches near 90-degrees angle. Finally, jump off the floor and switch your legs in the air, making the rear leg a front leg and front leg a rear leg. If you are using a MASS suit, this exercise becomes even more effective, because it creates an extra resistance for your knees, which will result in even more explosiveness.

One of the most elementary exercises has also found its way into Odell Beckham Jr. training regime. It is a great exercise to increase the strength of your upper-body and core. Odell Beckham Jr. is performing pull-ups to, simply put it, increase his pulling strength which is necessary for pulling down catches. To perform a pull-up, place your hands palms away from you on a pull-up bar shoulder-width apart. Then, try to pull yourself up while exhaling and slowly and steadily lower yourself while inhaling.

This straight forward drill improves the reaction speed, explosiveness, vision and eye-hand coordination of an athlete. Odell Beckham Jr trained these skills to an elite level thanks to this drill. To perform it, you need two tennis balls and a trainer or a friend. Stand about 3-5ft (1-1.5m) apart from each other and let the other person with the tennis balls throw them one by one in quick succession in random directions around you. When you catch a ball, throw it back to your trainer and repeat this process until both balls fail to stay in the air and fall on the ground. This drill should be performed non-stop, in a cycle of catching the ball and instantly throwing it back. Wearing a MASS suit while performing this drill will vastly improve your explosiveness and lateral quickness, while reaction speed and eye-hand coordination will become a nice bonus.

Slamming medicine ball is not only fun but also an effective exercise which works your fast-twitch muscle fibers. As a result, your upper-body explosiveness increases tremendously. Odell Beckham Jr. is performing medicine ball slams regularly to stay at the peak upper-body explosiveness. In order to do this exercise, pick up a medicine ball and hold it above your head with both of your hands. Then, slam it as hard as you can at the ground between your feet and catch it as it bounces back.

There are many different variations of this drill that Odell Beckham Jr uses regularly during his training, but the essence is the same regardless of the setup. To perform it, you will need three cones. Place one cone in the middle of your sprint line, then put the other cone 3 yards away to the right of the first cone. Finally, put the third cone 5 yards away to the left of the first cone. Begin this drill by facing the middle cone. Then, turn to your right and sprint 3 yards, shift your body weight by placing your hand on the ground and by changing direction run to the further-most cone Repeat this drill from the starting position and each time change to which cone (3 yards or 5 yards away) you sprint to first. Using a MASS suit while performing this drill will bring exceptional results to your explosiveness and ability to change directions quickly.