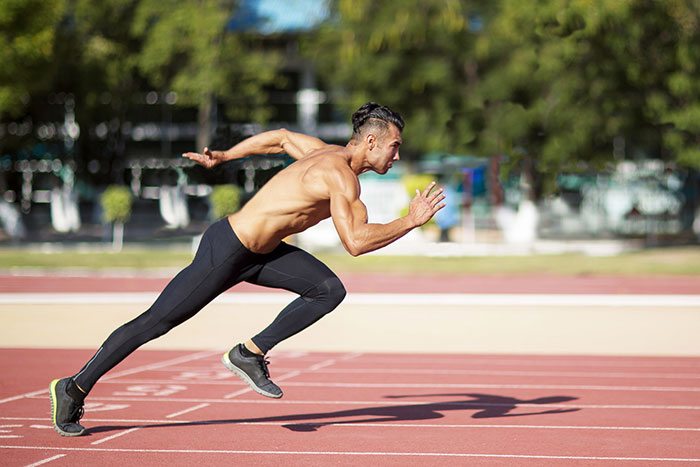 Moving faster has been the goal of the human race since ancient times. The fastest human has always been “the man.”

That hasn’t changed, especially when it come to elite athletes, professional and amateur.

It wasn’t too long ago when athletes accepted the widely held belief that speed was something you were born with. If you didn’t have it, well, that’s just how it was.

As we now know, speed can be improved through good planning, coaching, and careful repetition.

Almost every athlete wants to be faster, but there are four key qualities to look for, in order to determine the training requirements for speed development.

Holding optimal posture for starting, acceleration, maximal velocity and even speed endurance is critical for any speed athlete who is looking to maximize performance. Even though many experts claim that special exercise regimens are required to improve posture for speed development, the predominant contribution to posture, in terms of developing appropriate musculature, is from sprinting itself.

Sprinting drills can be incorporated into speed workouts to improve awareness of postural requirements, as well as target specific muscles used during sprinting.

The primary intent of these types of drills is to ingrain the concept of maximal hip height throughout the entire stride cycle. Poor posture typically will result in a lower vertical hip position that does not allow for powerful extension from the hips.

As with posture, limb mechanics must be modeled and rehearsed through the application of sprinting drills and careful execution of sprinting mechanics during sub maximal efforts. Like any skill, once the movement is mastered at slower velocities, greater effort can be applied to hone the technique over faster repetitions.

In other words, start slow and focus on technique.

General strength qualities should be developed throughout an athlete’s career to assist in improvements in speed abilities. As with any movement or sport technique, there will be a point of optimal strength development, as well as a point of diminishing returns.

Coaches (and athletes) should always be figuring out the athlete’s optimal window of strength development, without going overboard.

For example, consider the importance of strength movements like squatting and deadlifting for the 100-meter sprinter.

How much weight do world-class sprinters need to lift for these movements to improve their performance in the 100 meters?

By looking over the last 30 years of lifting performances, the loads for these lifts vary from 125 to 274 kilograms, depending on the athlete.

It’s up to coaches and athletes to find that optimal window of strength development that will ultimately play into increase speed.

We often associate optimal performance with maximal effort. The athlete who is grimace and straining to the finish line is often considered the model of success.

However, when performing movements that require maximal speed, unbridled maximal effort does not necessarily translate into optimal performance.

The concept of relaxation must be ingrained into all aspects of technical execution. If all muscles are tight and contracted, it is much more difficult to initiate a high-velocity movement.

This is true of all movements that require acceleration and technical proficiency, whether the movement is swinging a golf club, hurling a baseball or sprinting.

A finely tuned athlete has the ability to not only turn muscles on quickly, but also turn them off quickly, which is important for a high-speed, complex task such as sprinting.

Understanding that the optimal performance does not necessarily come about through the application of maximal exertion can be useful in honing your relaxation abilities.

The process of engaging in a comprehensive speed-training program should always begin with an evaluation of your current physical state.

Use these four key qualities as a baseline to jumpstart your speed-training regime.